The capital of South Tyrol - Bolzano 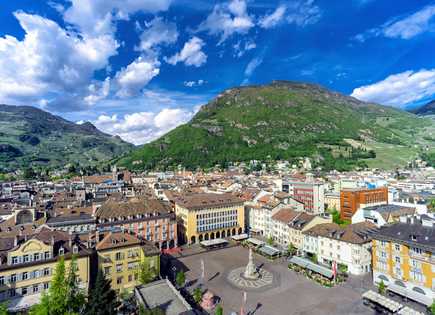 The capital city of South Tyrol, Bolzano, is only a 45 minutes drive from Val Gardena and is easy to reach by public transport.

The city of Bolzano is located at about 250 m asl and has got some 105,000 inhabitants, of which 26% are German-speaking, 73% Italian-speaking and about 1% is Ladin-speaking. Bolzano is the capital of South Tyrol, which officially bears the name “Autonomous Province of Bolzano“. The city is also seat of most of the departments of the autonomy administration.

The five quarters of Bolzano reflect the diversity of the small, multifaceted “city of the world“, which is of manageable dimensions, characterised by its Mediterranean ambience. As “city of a thousand dialects“, Bolzano provides an interesting insight into the way of expression of the inhabitants of the province. Bolzano, also called Bozen by the German-speaking population, is called Bulsan in Ladin language.

In the period of fascism, after WWI, many Italians from the south became established in Bolzano, while German-speaking people emigrated to the neighbouring states of Austria or Germany. Due to this Italianisation, Bolzano is today mainly inhabited by Italian-speaking citizens. The rich and animated past of the city is also reflected in architecture: the Mediaeval centre, the Jugendstil of the ending imperial-royal monarchy and neo-classicism of the Mussolini’s dictatorial regime alternate with modern façades.

Not only once you should walk the historic district of the city of Bolzano. Romantic alleys, markets and lively “Italian“ ado are going to make your walk a great experience.

the Old Town center of Merano is dominated by the long Laubengasse and the parish church of St. Nicholas. The Laubengasse connects the Pfarrplatz (the square in front of the church) with the Kornplatz, which was the marketplace of Merano in earlier times.

During a visit in Merano, one sight shouldn't be missed: The Castle of Trauttmansdorf and the tourism museum "Touriseum".

Ötzi - The Iceman and his history 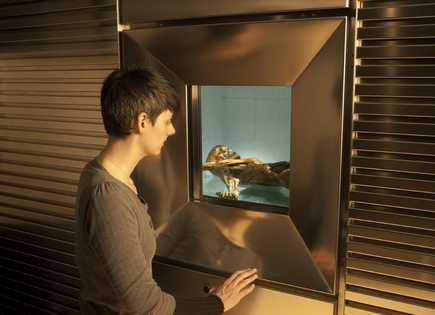 The Iceman on display at the South Tyrol Museum of Archaeology in Bolzano (South Tyrol, Italy) is one of the world’s best-known and most important mummies.

What is so unique about this find is that a Neolithic man whose life came to an abrupt end has been preserved along with much of his clothing and possessions intact.

Six days after the mummy was discovered, an archaeologist was finally brought in. Konrad Spindler, professor of Ancient and Early History at Innsbruck University, inspected the corpse and the finds and, based on the typology of the axe, immediately dated the whole find to be “at least four thousand years old”.
Until this discovery, such a well preserved find of a human several thousand years old – fully clothed and with numerous personal belongings – had never before been seen anywhere in the world.

From the outset the government of the province of South Tyrol realized the importance of the find and – after several years of storage and research at the Institute of Anatomy of Innsbruck University – decided to display it to the public in a museum setting.
With regard to the public debate on whether the corpse should be buried on completion of the archaeological, anthropological and medical examinations, a decision was thus made in favour of conserving and exhibiting it.

The finding should be conserved as perfectly as possible for posterity while at the same time being made accessible to the interested public. Research work on the body should also continue.
The mummy itself is laid out nearly hidden from view in an apse-like darkened room and can be viewed through a window, past which visitors file.
The viewing window into Ötzi’s refrigerated cell measures just 40 x 40 cm due to conservational constraints. A larger opening would have resulted in excessive temperature fluctuations inside the cell.
At the same time the designers of the exhibition wanted to provide an intimate atmosphere for the mummy for ethical reasons.

The permanent exhibition of the South Tyrol Museum of Archaeology is dedicated entirely to Ötzi, the Iceman. It occupies three floors of the building.

The top floor of the museum houses special exhibitions of various archaeological topics. These change regularly.

Visit the wonderful city of Bolzano and this sensational museum.

The quaint little town of Merano has been a popular place of establishment in the past, with many famous scientists and doctors.

Above all, they appreciated the clear, curative air and the mild, Mediterranean climate of this health resort in South Tyrol.

Beside the healthy climate there is also a thermal bath in Merano. The water, which contains radon, helps to cure circulatory problems and arthralgia.

Not only in South Tyrol, but far across its borders, Merano and the Meranerland have become a synonym for mild climate and fresh air.

For centuries Merano was considered to be the centre of Tyrol’s counties.

Its cultural landscape is enriched by many splendid and magnificent buildings, especially castlesand mansions, dating back to the period of the counts and earls.

During the decades much attention and interest was dedicated to this spa in South Tyrol, and therefore Merano has become a well known town.

the Old Town center of Merano is dominated by the long Laubengasse and the parish church of St. Nicholas. The Laubengasse connects the Pfarrplatz (the square in front of the church) with the Kornplatz, which was the marketplace of Merano in earlier times.

During a visit in Merano, one sight shouldn't be missed: The Castle of Trauttmansdorf and the tourism museum "Touriseum".

The gardens of Trauttmansdorff Castle 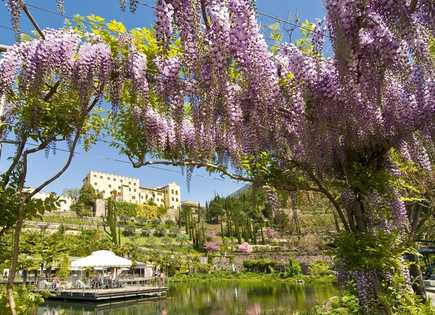 The Gardens of Trauttmansdorff Castle, located in the town of Merano (Meran) in northern Italy, is a botanical garden nestled into a twelve-hectare amphitheatre with an altitude differential of 100 meters. Trauttmansdorff offers spectacular views of exotic gardens and breathtaking vistas of the surrounding mountains and the spa resort town of Merano.

Colorful plants from all around the world thrive and bloom in Trauttmansdorff’s more than eighty garden landscapes. Ideal for both children and adults as well as for botany experts and laymen alike, the Gardens of Trauttmansdorff Castle is a unique blend of botanical garden and recreational attraction. Multifaceted Experience Stations, spectacular themed gardens, Artist Pavilions and intriguing animals turn the Gardens of Trauttmansdorff Castle – within easy walking distance from Merano – into a colorful world where visitors enjoy a variety of different experiences.

The Touriseum, South Tyrol’s Province Museum of Tourism, covers 200 years of tourism history in Tyrol and Merano in a very engaging way.

Viaggi Gardena offers every Friday a guided tour to Marano and Trauttmansdorff Castle. The coach will pick you up right at Hotel Albion and you'll be accompanied by a professional tourist guide during the whole day. Ask at the reception and we'll be happy to give you all information about prices and sign in.

The gardens of Trauttmansdorff Castle

Bressanone/Brixen - the bishop's town from the Middle Ages 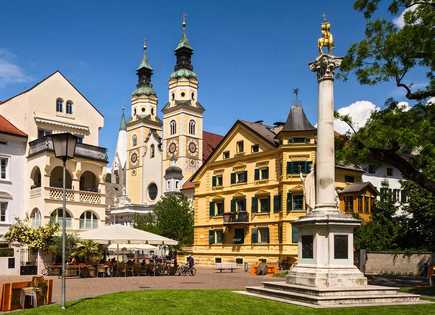 The Baroque town of Brixen/Bressanone is the oldest town in Tyrol and has been a bishop’s seat since 901. It is marked by sunny Mediterranean slopes at the southern side of the Alps and located at the most important travel routes of previous emperors towards the south of the German Reich.
The bishop’s town from the Middle Ages with its town gates, porticoes, oriels and squares is not only animpressive backdrop for cultural events. The Franzensfeste, the chapels of the holiday villages along the Plose mountain, the residences along the Chestnut Road – all speak of glorious days gone by.

The porticos, the moat and the winding lanes of Brixen are home to some great shops and just perfect for a relaxing walk.

Vipiteno - the most northern city of Italy 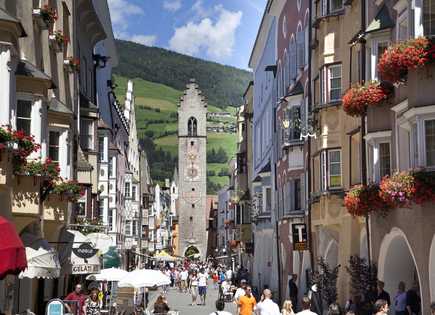 Vipiteno, the alpine town, enchants its visitors with a unique charm. The small town, which once served as a refuge for kings and emperors, is a sparkling jewel rich in ancient art, boasting in particular numerous wonderful bay windows as well as elegant boutiques today. The picturesque old town is one of the most beautiful centres of Italy and a real pearl of South Tyrol.
Many castles show the strategical position of this city in history and also a visit to the "house mountain" Rosskopf/Monte Cavallo is mandatory when you visit this wonderful city.